Why You Keep Shooting Yourself In The Foot

The other day someone on Twitter put out this question, “What do you think are the most common self-inflicted wounds?” They were targeting leaders but I think it’s a great question for all of us to ponder.

Here were some of the replies: 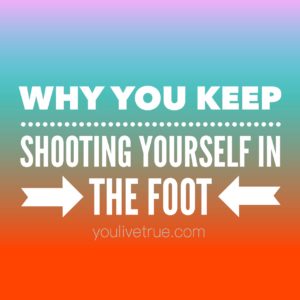 – surrounding yourself with people who are afraid to disagree with you

– being a people pleaser

– thinking too highly of themselves

– viewing themselves as irreplaceable

– not knowing when to shut up

All of these are valid answers. Some, we would definitely identify as issues we’ve had ourselves. But, almost everyone seemed to be thinking that obvious, surface behaviors are the cause of our self-inflicted wounds.

We think it’s deeper than that.

We believe the most significant culprits of self-sabotage and people problems of every kind are found in three subconscious, internal drivers:

Take any failure, personal, relational or professional and you can pretty much count on shame, fear or guilt being at the bottom of it.

These same three drivers seem to be present in the garden story of Genesis and in the wilderness temptation of Jesus.  Now, the scripture, “No temptation has overtaken you except what is common to man” (1 Cor 10:13) takes on an even fuller meaning.

So, what’s going on?

While we have all three operating in us, it’s important to note that most of the time we have one dominant driver (and maybe a lesser second)  we seem most attached to.

Your job is to get to the bottom of which one or two might be steering you the wrong way.

When was the last time you had a personal, relational, or professional crash, crisis or misunderstanding of some kind? Maybe you have a situation going on right now that has you stuck or mystified.

When you find yourself overreacting, angry, anxious or lonely (or feeling anything  that takes you out of love, joy, and peace) ask yourself questions like this:

If you can begin to recognize (and override) which of the subtle patterns of shame, fear or guilt are most often operating in you, you can significantly reduce casualties from future self- inflicted wounds and increase your sense of well being.

But, sometimes, we need help figuring out what’s driving us. ( We did!) That’s why we’re helping hundreds of individuals and teams get to the real root of important issues in their lives, marriages, ministries, and businesses.

*** Next week we’ll unpack the antidote for each of these three patterns, so that you can live in greater freedom than ever before, and not regularly shoot yourself in the foot, or anywhere else.