In our interview today, David Loveless continues his conversation with Paul Young. He is the author of the New York Times bestsellers The Shack, Cross Roads, and Eve, and the Lies we Believe about God.  His books have sold more than 24 million copies worldwide. A major motion picture of The Shack was released worldwide early in 2017.

Paul Young was born in Canada and raised among a Stone Age tribe by his missionary parents in the highlands of former New Guinea. He suffered great loss as a child and young adult and now enjoys the “wastefulness of grace” with his family in the Pacific Northwest. 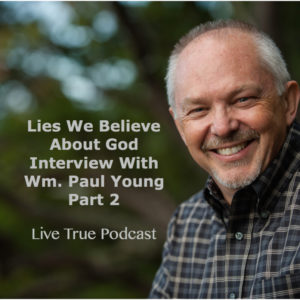 In Part 2 of this interview, David talks to Paul about his newest book: Lies We Believe About God: 28 commonly uttered things we say about God as lies that keep us from having a full, loving relationship with our Creator.”

Click the play button above to listen to this episode, that we believe could be a potential turning point in your life.

If you missed Part 1 of this interview, click HERE.